Where is that thing …

the TV remote, that is.

My niece Gracie came over for a visit today and the very first order of business for her was to turn on the TV.  She turned it on by the power button on the set (what a concept) and there was nothing but static.

She said “fix it Nini”.  And I stood there, dumbfounded, because I couldn’t fix it.

In order to fix it, I would need the remote and I haven’t seen that particular piece of equipment in weeks.

Or maybe months, I’m not certain.

She frowned at me as though I had popped her brand new balloon with a needle.

But what was I to do?

I don’t know where it is.  I have looked for it so I could watch “Lord of the Dance”, “The Fugitive” and “Wolf”.

I haven’t found it, but I have, most diligently, looked for it.

Mayhaps the elusive mouse that I have been trying to catch carried it off.

I have looked everywhere, even in places that I am certain, without a shred of doubt, that it could not possibly be because who really knows what goes on when I sleepwalk?

But I looked anyway just to satisfy my own curiosity.

It has simply disappeared.

I haven’t had the TV on in months and have had no need of the remote.  That doesn’t justify its disappearance.  It didn’t simply evaporate.

So instead of the TV, I subjected her to my current obsession with John Cougar.  She didn’t seem to mind, not overmuch anyway, but every now and then, she would look at me and shake her head.

It is hard to swallow the disappointing looks from a five year old.

Sorry, Gracie. I’ll try to do better next time.

kisses blown from an angel

literally.  The night was filled with dreams; vivid, bold, colorful dreams.  I woke myself up once talking but at least I wasn’t walking around outside.  That’s always a plus.

In the wee hours.

I know, by the sight of my bedclothes this morning, that I did my fair share of tossing and turning … turning to the point that my head was at the foot and all four of my pillows were in the floor.

When the alarm sounded, I sat up immediately, as I always do, so as not to drift back off to sleep.  It didn’t occur to me when I wasn’t able to find my cell/alarm that there might be a problem until I stood up and planted my face squarely into the wall.

I knew then there was a problem.

The pain was intense and my first thought was of an old episode of “The Brady Bunch” in which one of the brothers threw a football and hit Marsha in the nose.  I actually remember putting my hands over my face and saying out loud “my nose”.  I said a few other things as well, but no point revisiting that because it is neither here nor there.

The last thing I need is to break my nose again.  Well, maybe not the last thing, but it’s on the list.

As far back as I can remember, I have been a very active dreamer, not in the wishful thinking sense (though I am that kind, too), but a sleep dreamer.  I nearly always remember my dreams which, depending on the dream, can be a good or bad thing.  I talk and walk and do all kinds of crazy things in my sleep.  I attempt to control my dreams by thinking of things I want to dream of before I drift off.

If it did work, I would dream of Vincent D’Onofrio on a regular basis.  As it happens, I don’t think I have ever dreamed of him.

The rest of the day after my face plant pretty much followed suit.

Murphy’s Law at the top of its game.

It ended magnificently, however, with a belligerent storm full of righteous fury.  The lightning slashed, thunder cracking behind, slamming the air with sound and more than once, causing me to jump like a rabbit.

No far-off rumbling bellows for it this night.

It was pure awesomeness.

Hoping the serenity it left behind will stay with me and allow real sleep without all the drama.

Bodie Island Light in the darkness 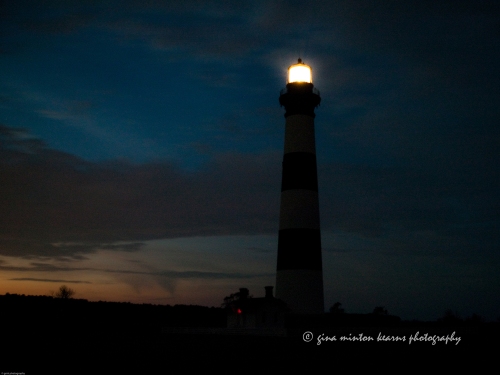