String Music ~ the kind that only green beans can make

My dad is an avid gardener, farmer and all-around jack-of-all-trades.  He has a thumb so green that it makes the grasshoppers sigh with envy.  Everything he touches in his garden grows like wildfire.  While that is, on most occasions, a good thing, there is one part of it that makes me sorry he even knows what dirt is.  That part is bean-picking.  I put bean picking right up there with being staked to an anthill.

The garden itself doesn’t look like it is all that big, but the vines are large and tangled, weaving in and out of the corn, weeds and other vines.  There is certainly no shortage of beans hanging on those voluptuous vines and for every one that is picked, there are fifty more that magically appear.  The rows, which at first glance look like they are firmly planted in the ground, get longer and longer once the picking starts.  At last look, the rows were well over ten miles long.

The foliage on the vines is filled with a poison that eats into the skin and causes unspeakable itching.  Or perhaps it is the millions of mosquitoes, gnats and other biting varmints that do that.  Redness and numerous whelps show up within moments of stepping into the rows of vines.  Just thinking about it makes me itch.

He has other things in the garden besides beans, of course, but gathering the corn, cucumbers, squash and zucchini doesn’t make my leg muscles feel like they are going to explode and my back want to just lie down and die.  While I inwardly lament, complain and whine, the picking of the beans doesn’t seem to phase him at all.  As a matter of fact, I truly believe he likes it.

Now, I like to eat green beans as  much as the next person and am thankful for the garden which provides a great deal of food not only for our family but for the folks that dad sells or gives the beans to.  While I’m not afraid of hard, backbreaking, browbeating, muscle-bursting, sweat-inducing work and will help in the garden  in any way that I can, I sure do wish the beans would somehow pick themselves. 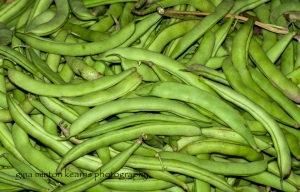